The Provocations of Kent Monkman 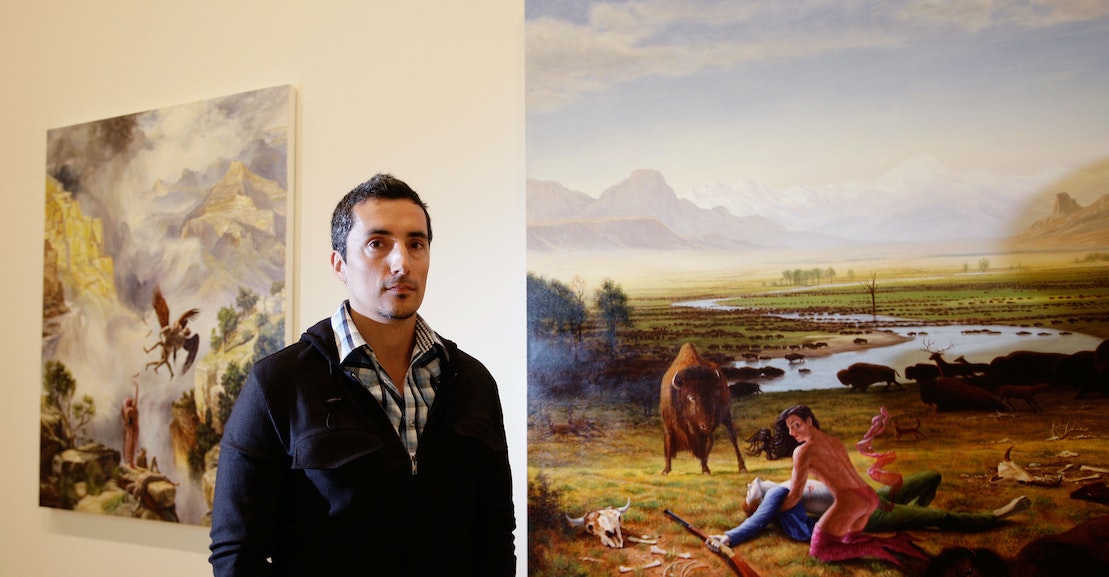 Canadian Prime Minister Justin Trudeau is on all fours, his shoulders grasped by a snarling woman in dark gray chinos, his ass cheeks being spread apart by a woman in a light blue tank top, her head thrown back in mid-laugh. Standing over them is Miss Chief Share Eagle Testickle, donning a pair of thigh-high leather boots and a body-length feather headdress. In her grasp, raised high, is a butt plug, painted blood red and shaped in the form of a hand—the unofficial symbol used in the many awareness campaigns for the Missing and Murdered Indigenous Women, or MMIW, crisis, wherein Indigenous women and girls in North America, including the LGBTQ2S community, have been abducted and killed at astronomical rates due to centuries of neglect by the Canadian and American governments.

There’s more to Hanky Panky, the latest controversial painting from Kent Monkman, a renowned artist and two-spirit Fisher River Cree Nation citizen who recently placed two paintings, mistikôsiwak (Wooden Boat People) and Resurgence of the People, in the Metropolitan Museum of Art’s Great Hall. There’s the setting of the ceremony room, full of Cree women in various forms of traditional and modern dress, all of them laughing, presumably at Trudeau’s fate; there’s the huddle of aghast, gray-faced men, several of them physically comforting a concerned John MacDonald, Canada’s first prime minister, who ignored treaties and intentionally starved the Indigenous population to make way for the national railroad; there’s a Mountie, lying facedown, ass out, pants around his knees.

This literal marginalization of the scene’s Indigenous women, as well as the painting’s notion that sexual violence should be repaid with sexual violence, broadly defines the criticism that has been voiced since Hanky Panky’s online release last week. Anticipating the backlash, Monkman included a content warning when he unveiled the work on Instagram. Monkman also posted an explanation of the new piece to his Facebook page on Saturday. Despite what the painting suggests, the Trudeau character is not about to be assaulted, Monkman claims, because he has a faint smile on his face and a red handkerchief in the back pocket of his pants, a reference to the hanky code, in which a red hanky denotes a preference for fisting. Monkman offered no explanation for the facedown, ass-up Mountie, whose pockets are empty, though he did post an apology two days after the release of the painting that addressed the critical response to these shortcomings.

“I acknowledge that the elements I had included to indicate consent are not prominent enough, and I see now how the painting could appear,” Monkman wrote. “As a cis-gendered Two-Spirit Cree man, I have always wished to prioritize the safety and wellbeing of non-binary, trans, Two-Spirit and women viewers. I see that with this work, I have failed. I wish for my work to resist the colonial traumas inflicted upon my own family and so many others for generations, not to perpetuate harm.”

The offensive aspects of the painting are certainly deserving of wider discussion. But they all tie back to a broader critique of many of Monkman’s works, which is that they try both too hard and not hard enough. In Hanky Panky, he wishes dearly for the scene to be provocative and to underscore the violent experience of colonization for Indigenous women by flipping the power dynamic and placing Trudeau on the receiving end. Some have argued that Monkman does so without fully taking into consideration the feelings of those he’s purportedly trying to uplift. The more egregious sin is that he apparently stopped thinking about any of it halfway through.

The issues surrounding Hanky Panky trail back to an ongoing conversation within every Indigenous arts community: When our work is consumed by largely white audiences, it too often is overwhelmed by the historical context of the piece in question—specifically, what the piece evokes in the white viewer about their relation to their bloody past. The aesthetic and thematic merits of the work are left at the door.

The very fact of Indigenous work existing in non-Indigenous spaces is complicated by issues of race, appropriation, and neocolonialism. As Julian Brave Noisecat wrote last year for The Walrus, exhibitions like the one Monkman displayed at the Canadian Cultural Centre in Paris, while gorgeous, “are also the product of a simple curatorial calculation: Indigenous arts and culture are the most unique and authentic thing Canada has to offer the world.”

This dynamic explains why the very existence of Monkman’s paintings in the Met, more than the actual art itself, fueled a host of laudatory articles from Canadian and America media outlets. “A Cree Artist Redraws History,” blared The New York Times. The coverage all patted the Met on the back for forcing the North American art scene to momentarily glance at the dark depravity that is the history of colonialism. Regan de Loggans, an art historian and citizen of the Mississippi Band of Choctaw Indians, got at the root problem of the universal praise for Monkman’s art in a recent essay for Canadian Art:

Monkman’s paintings do little to question art-historical inequalities between settlers and Indigenous peoples, and pander to the erasure of Indigenous sovereignty through the narrative of a shared history between settlers and colonizers as though their experiences are commensurate. The shared-history narrative proposes multiculturalism and increased representation as reparations, and conflates colonialism as a wrongdoing of the past when it is in fact a system of the present.

The simple and hard truth for Indigenous artists in North America is that the path to financial independence and widespread acclaim is through institutions built by colonizers—institutions like the Met and the Smithsonian, which still regularly display culturally and religiously important Indigenous items and call them art. Their walls were built on stolen land and their rooms stuffed with stolen artifacts. And yet penetrating those same walls is billed as the most assured pathway to success, so creative sacrifices are often made. The confines of this economic and cultural reality squeeze mainstream Indigenous creators into the same problematic group that includes Disney’s Pocahontas or any of the hundreds of Western white savior narratives—a group that profits white people at the expense of a marginalized people.

In the case of Indigenous artists like Monkman, the power dynamic shifts to a form of lateral violence—i.e., violence between those in Indigenous communities. Hanky Panky’s failure to clearly define the intentions of its characters, particularly the Indigenous women, is a kind of appropriation, too. It falls in with a tradition of artists voicing the perspective of Indigenous groups that do not wholly belong to them. This is not an intrinsically flawed creative pursuit, but speaking from another perspective always invites such critiques, due to entrenched conservative attitudes formed by past cultural mining and misrepresentation. Authors Rebecca Roanhoarse and Linda Hogan both were attacked on these grounds for their books Trail of Lightning and Mean Spirit, respectively. So was Leslie Silko for her book Ceremony. In the fine art world, the closest applicable case is Fritz Scholder, the renowned Luiseño artist of the twentieth century who was a self-described “non-Indian Indian.” The pervading question being: Who gets to create art about whom?

Monkman, a member of the two-spirit community, seems to at least partially acknowledge the limits of his vantage point in his many works featuring Indigenous women as characters. (The same cannot be said of Miss Africa, from four continents, in which he takes liberties with pan-African art.) And it should be said that provocation is Monkman’s M.O. He wants to press audiences to venture outside the heteronormative comfort levels defined by colonialism’s religion of choice. He clearly has the talent to do so. The attention to detail in his hyperrealized characters is always stunning, as are his eye-popping color palettes. Monkman’s work leaves the viewer in awe of its grand scale and taken aback by its extreme content. His specificity is his greatest asset, each person carefully considered.

But is that enough? Just because Monkman alludes to terrible history does not mean he has anything really profound to say about it. Worse, his work merges with the history and perspective of the descendants of colonizers, which then makes it easier to sell and place in museums. In the case of his latest, the trauma that is still experienced as a result of the MMIW crisis is absolutely not shared, by white audiences or by Monkman. As a result, Hanky Panky is a half-baked concept. Trudeau’s bare ass is not a clever subversion of, or commentary on, colonial violence against Indigenous women. It’s a teenager’s angry Facebook post lamenting the white man’s rigidity, realized for the canvas: How’d you like it, huh?

After the initial shock wears off, the scene’s minutiae—Trudeau’s hanky, MacDonald’s cameo, the faces of the women holding Trudeau steady—leave the viewer with little more to offer than a shrug of the shoulders and some righteous indignation aimed not at the depicted whites, but at the Cree artist they crowned.