Why the Pandemic Is Driving Conservative Intellectuals Mad 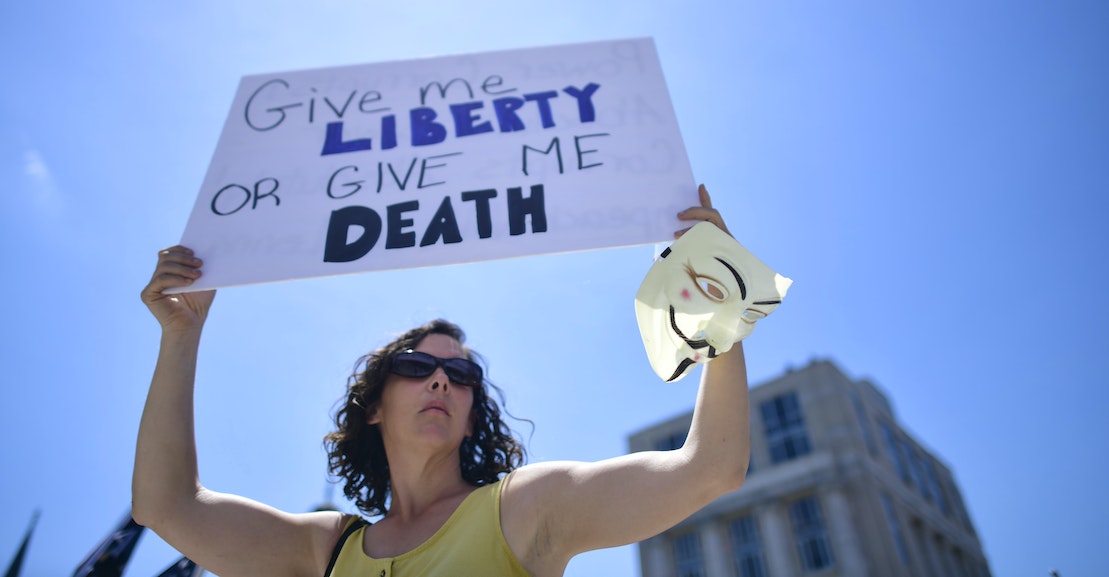 The reaction from critics was swift and punishing, as they noted the emerging wisdom that masks may be one of the most effective measures in preventing the spread of Covid-19. But Reno decided to tweet through it in a typo-laden tirade. “The mask culture if fear driven. Masks+cowardice,” he wrote. “It’s a regime dominate by fear of infection and fear of causing of infection. Both are species of cowardice.” Other, similarly garbled tweets followed, but one of them serves as an especially telling summary of his position: “Now we know who want to cower in place. By all means rage against those who want to live.”

The outburst was no aberration. Since March, he’s produced a string of commentary doubting the severity of the pandemic and lamenting the measures taken to combat it—particularly the temporary closures of churches. It’s not as deadly as we feared, he’s said, and for those under 35, perhaps little more worrisome than the flu—a statement that blithely ignores all that we still don’t know about Covid-19, from the long-term effects it might cause in even healthy young adults to the sudden spike in a Kawasaki-like disease in children. No matter. Reno renders his verdict: “The science increasingly shows that the measures we have taken in the last few weeks have been both harmful—with freedoms lost, money spent, livelihoods destroyed—and pointless,” he wrote.

It’s not just that Reno can sound at times like a coronavirus truther. He is also convinced that our pandemic response stems from a deeper civilizational malaise, one that prioritizes the fleeting material world over the everlasting life that awaits our souls after death. In a missive published in March, Reno declared, “There are many things more precious than life,” and castigated political leaders, especially New York Governor Andrew Cuomo, for leading “an ill-conceived crusade against human finitude and the dolorous reality of death.”

Reno is not alone on the Christian intellectual right in framing the shutdown as part of a grand narrative of spiritual decay. His colleague Matthew Schmitz wrote that, in valuing “health above all, we subordinate the spiritual to the temporal,” adding, “Unless religious leaders reopen the churches, they will appear to value earthly above eternal life.” National Review writer Alexandra DeSanctis caught flak on Twitter for writing, “It’s fascinating to see how the cultural loss of belief in God and eternity so often manifests in an outsized fear of death as the ultimate evil. Human life is beautiful and precious and good, but life on earth isn’t our ultimate end.”

The latter prompted a lot of jokes about the literal death cults forming on the right, but there is something more at work here. Writing in Providence magazine, Jason E. Vickers described this death-embracing cohort as possessing a “bitter remnant mindset,” and acting “as though they are the last Christians in America.” It’s a worldview shot through with grievances against the corrupt, decadent societies of the West, and it’s shared by otherwise very different factions on the right. Followers of Rod Dreher’s Benedict Option might seek to build intentional communities and withdraw from modern society, while Christian nationalists long for the political power to defeat it—but they have the same enemies.

For all Reno’s paeans to courage, the pandemic has shown us, in starker terms than before, the extent to which modern conservatism is driven by resentment of a seemingly hostile, terrifying world. Not all conservatives have succumbed to this impulse during the pandemic, of course. But those who have reveal the ways in which the pandemic is being shoehorned into a familiar culture war.

Let’s return to the example of Reno, since he manages to encompass both the raging id of the anti-lockdown protesters and the philosophical justifications of their actions that have appeared in the conservative press. One of his “Coronavirus Diary” entries begins with him visiting an emergency room in an outer-borough hospital. He can’t say more, though, because “the present conditions of public health hysteria” mean his host “might lose his job if higher-ups found out I penetrated the ‘no visitors’ cordon sanitaire.” Reno notes that, after cases of COVID-19 flooded the hospital in late March and early April, the doctor says they had since plummeted—a development Reno passes over as a happy mystery, never connecting it to the stay-at-home orders and economic shutdown that he has called “pointless” and “cowering.”

Reno also mentions that he’s been worshipping at an “underground” church, borrowing the language Christians have used for those persecuted by Communist regimes in China or, during the Cold War, behind the Iron Curtain. A sense of persecution hangs heavy over the article, as does the characterization of himself as a righteous dissenter.

Then the diary entry becomes surreal. Reno describes a long bike ride on a recent weekend, during which a Dunkin Donuts worker refuses to serve him because he isn’t wearing a mask. He ends up on Staten Island, and needs to take the ferry back—which also requires a mask. “Providentially,” he writes, “I found a mask in a gutter just before reaching the Staten Island Ferry, allowing me to board and steam back to Manhattan.”

What comes next comes as no surprise: Reno takes an antibody test, and the results show he had contracted the virus. Like the ending of certain novels, it transforms all that came before it. Was he wearing a mask in the hospital, or at his “underground” church? He doesn’t say. Reno doesn’t seem troubled that, even if he never had significant symptoms, he could have been spreading the virus to others. He doesn’t realize that wearing a mask is not a commentary on his own courage or virility, but a simple way to show concern and care for others who might be especially vulnerable to the ravages of Covid-19.

There’s little point in looking for sense or reason in Reno’s ramblings. The language of courage and cowardice can’t really be debated—it is pure emotion. The point is not to grapple with the reality of a complex, overwhelming situation that changes every day, about which there can be genuine debates, but to reinscribe it in affective terms. What becomes decisive is not the cogency or persuasiveness of a policy response to a public-health crisis, but whether or not you’re cowering in fear or bravely resisting the conformity imposed by dreaded, elite experts. Wearing a mask, or not, floats up to the realm of the purely symbolic. It is a way of brushing aside difficult questions for dramatic rhetoric about civilizational decline.

If Reno and others make this sort of argument in a religious key, others on the right render it in supposedly class terms. Patrick Deneen took to Twitter last month to say that the divide over the shutdown did not simply reflect your position on Trump, but might reveal “more fundamental differences between elites and masses,” sharing Christopher Lasch’s observation in Revolt of the Elites that “young professionals” are health-obsessed exercisers and dieters attempting to attain eternal beauty and live forever, while “ordinary people” just “accept the body’s decay.”

More recently, The Wall Street Journal’s Peggy Noonan, citing no evidence, regretted the “class divide between those who are hard-line on lockdowns and those who are pushing back.” The former consist of the professionals who make up the “overclass,” with the latter are “normal people” who are fatalistic about life, and therefore itching to open up the economy—a “generalization” she offers “based on a lifetime of experience and observation.”

Once again, all this only serves to twist debates over when and how to reopen the economy into a battle between supposed elites and ordinary folks who have not only been ignored and left behind, but also ridiculed. This just hasn’t been the case so far, and Reno, Deneen, and Noonan are making it up as they go along. The latest polling continues to find, as described in a recent Washington Post article, “that there just aren’t meaningful divisions along class or education lines on these questions.” There certainly isn’t a rugged, death-defying, God-fearing working class straining against the complacency of prissy white-collar overlords. Imagining that’s the case, however, is less challenging than talking about what actually will help workers: hazard pay, paycheck protections, paid medical leave, proper safety equipment, and robust testing. It’s grievance-mongering all the way down.

The writer Sam Adler-Bell has described the “mutable dynamism” of conservative politics, a term that captures the way the search for fresh enemies can stoke these passions. It explains why conservatives respond to novel situations with a tried-and-true mash-up of elite bashing and performative victimhood. But Americans’ reserve of patience and good will so far shows the glaring mismatch between the old script of grievance and a sickness that can wreak destruction on anyone.

Reno’s embarrassing pandemic punditry is finally the predictable consequence of the way he compromised himself by endorsing Trump, then taking up the mantle of “national conservatism.” G.K. Chesterton, a writer well-known to First Things editors, once wrote, “When a man concludes that any stick is good enough to beat his foe with—that is when he picks up a boomerang.” To view Trump as a useful wrecking ball, or a flawed vessel for an otherwise sound nationalism, with his critics being the real problem, is to be set adrift morally and intellectually. You take your bearings less from what you believe than what you oppose; if it provokes cosmopolitan elites, then there must be some value to it.

On Monday, after having deleted both his tweets about masks and his Twitter account, Reno published an apology at First Things. “I used over-heated rhetoric and false analogies,” he wrote. “It was wrong for me to impugn the intentions and motives of others, for which I apologize.” He should be taken at his word—but what the episode reveals about the intellectual right isn’t limited to a few late-night tweets.