What If Mass Unemployment Is Here to Stay? 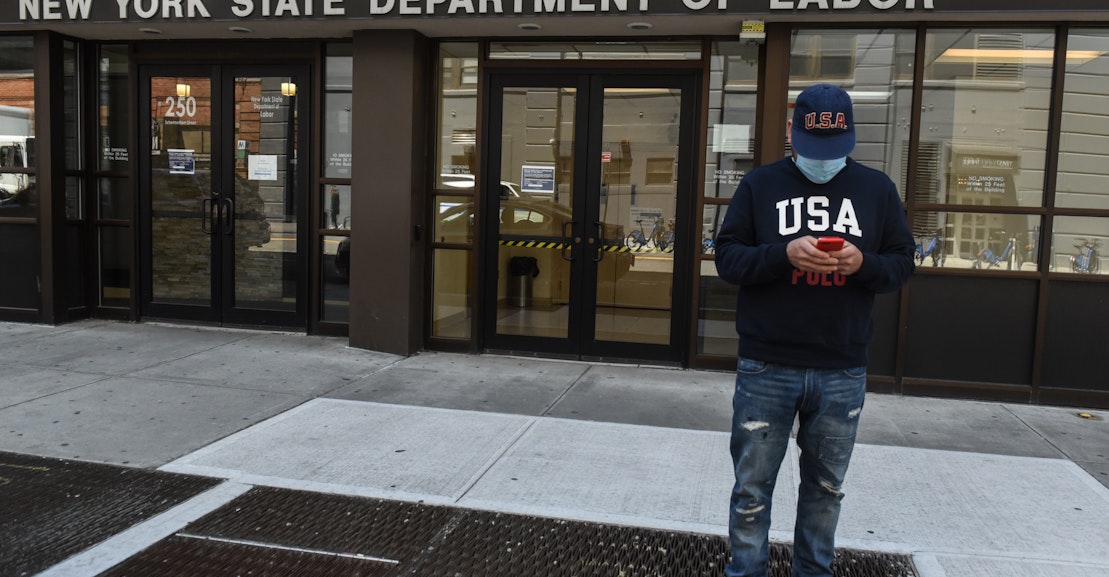 “We will not wake up after the lockdown in a new world,” the author Michel Houellebecq recently and gloomily predicted. “It will be the same, just a bit worse.” But if the staggering death rate in the United States and the ongoing stumbles of the federal and state governments when it comes to helping people weather the economic collapse are any indication, “just a bit worse” might not even encompass the extent of the damage to come.

The patchwork of relief measures supplied by the stimulus bills that have so far gone into effect are, in theory, better than nothing, though they have amounted to essentially that for millions of people. A shortlist of their failures might look like: an insufficient relief program for small businesses that was partially devoured by large corporations and ran dry almost immediately; an overloaded and ill-functioning unemployment claims system that has left millions of newly laid-off workers unable to collect benefits; and the complete inability of the government to guarantee any kind of meaningful health care access to everyone in the midst of a massive public health crisis. And there’s no clear end in sight: The 38 million jobs lost over the span of just a few months aren’t likely to just magically appear when state lockdown orders expire, despite what the president has insisted.

According to one recent poll, nearly 80 percent of laid-off workers said they expected to be rehired once the pandemic was over. But that, as Washington Post columnist Helaine Olen recently wrote, may be too optimistic. “The layoffs, which began in low-wage sectors and public-facing industries hit hard by shutdowns, are spreading,” she noted. “Many of those so-called furloughs will turn into something much more permanent.” According to one estimate from economists at the University of Chicago, up to 42 percent of the jobs lost during the pandemic might in fact vanish forever, as stores and restaurants go out of business permanently or are only able to reopen at a diminished capacity. And for industries that were struggling to stay afloat even prior to the pandemic—journalism, for one—the financial impact of the coronavirus crash could be fatal.

Even if every single lost job eventually returns, it probably won’t happen for years, judging by the country’s previous recession recoveries. As a Yahoo Finance analysis of Labor Department data found, “Beginning in 1991, each of the last three recessions has been followed by a ‘jobless’ recovery in which the economy starts growing again, but employers remain stubbornly resistant to hiring.” In the wake of the Great Recession, it wasn’t until nearly a decade later that employment finally returned to pre-recession levels. (And even that eventual job recovery, as it happens, did nothing to reverse decades of already stagnant wages.) That’s sure to have serious consequences for laid-off workers themselves. The effects of long-term unemployment—defined as being out of work for six months or longer—on people’s well-being and future labor market prospects are both grave and well-documented: One report from the Urban Institute, for instance, found that people unemployed over the long term not only suffered from poor health and earned less when they eventually found new jobs, but that their children’s academic performance also deteriorated. People unemployed for more than six months have also reported higher rates of mental health issues, such as depression, anxiety, substance abuse, and even suicide. Or as the historian Michael Denning once grimly put it, “Under capitalism, the only thing worse than being exploited is not being exploited.”

More troubling still is that our existing safety net—now strained to its breaking point by the pandemic—is hardly equipped to deal with a spate of wide-scale, long-term unemployment, and even those who have successfully filed unemployment claims have found themselves hanging. “For basically six weeks I’ve received nothing,” Scott Ross, a Maryland-based restaurant manager laid off in March told Bloomberg. The initial claims process, he also noted, had taken him six hours to complete. On the one hand, some economists have argued, the country does have more anti-poverty provisions than it did on the eve of the Great Depression, including, most importantly, an actual system of unemployment benefits, even if it’s now overloaded. But at the same time, the last 40 years have also seen steady assaults on those very same resources by politicians on both sides of the aisle. In particular, welfare reform in the 1990s, which instituted work requirements for a series of benefit programs, has made it all the more difficult for people to access aid when they aren’t employed.

In other words, any kind of meaningful anti-poverty measures will have to treat mass unemployment as one of its starting points, not as a temporary problem that will naturally resolve itself when the country reopens. That means, among other things, seriously rethinking long-time bipartisan favorites like the Earned Income Tax Credit, which not only relies on having some form of labor income in the first place, but, according to a recent study by the think tank People’s Policy Project, does little to pull most poor households out of poverty or even increase employment.

Creating an anti-poverty framework that can account for long stretches of people not working will also entail extending and expanding unemployment benefits, which Republican members of Congress are again attempting to pare back because said payments currently constitute slightly more than poverty wages. “No one can say with certainty what the economy will look like months from now when funding runs out, especially with 50 different state responses,” a spokesperson for Republican senator Chuck Grassley said by way of explanation for Republicans’ reluctance to pass another stimulus. But that unpredictability is precisely the problem. We know what happens when we’re not prepared for what’s coming. We’re living it right now.