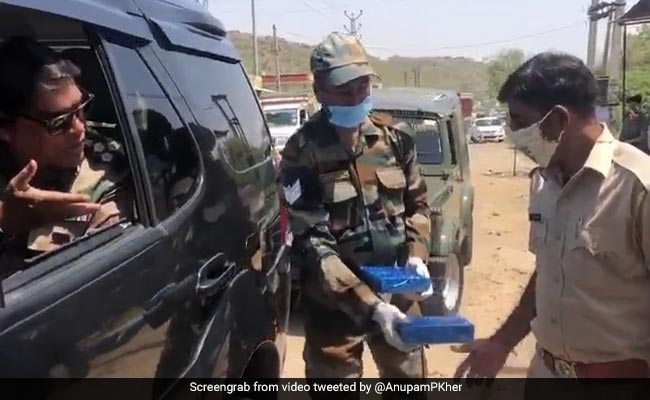 An Army officer praised the work of police and the Home Guard in a viral video.

As the nation applauds “coronawarriors” who are at the frontline of the fight against the COVID pandemic, the Indian Army also appreciated their work in a video going viral online. An Army officer was filmed distributing sweets among police and Home Guard personnel in Rajasthan as a token of appreciation for the work they have been doing amid the nationwide lockdown.

“We are all proud of the Indian police for their good work,” the Army officer says in the video, which was first posted by Bikaner Police on Twitter two days ago and has since been widely circulated on social media.

“Our jawans wanted to present you with mithai,” he continues, addressing a cop and a Home Guard personnel. “This is a gift from us,” he adds, as an armyman hand over boxes of sweets to the cops.

The Army officer goes on to praise the work done by the police force during the pandemic and says, “While everyone is worried in these times of COVID, yours is the only force working calmly, be it for population control or traffic control.

“Our thanks to you,” he adds, instructing the jawan to hand over more boxes of sweets to the police station.

Among the many viewers the video impressed was actor Anupam Kher, who received it over WhatsApp and shared it on Instagram and Twitter. “This is one of the most motivating videos I have seen in these times of #Covid19,” he wrote. “An Indian Army officer is applauding the work being done by our police and home guards personnel. Listen to his words of appreciation.”

The video has collected over 1.5 lakh views since being posted on Instagram this morning by Mr Kher. Many social media users joined him in appreciating the work of police and Home Guard personnel.

Earlier this month, the armed forces had also felicitated healthcare workers and other corona warriors in a nationwide thanksgiving effort which included flypasts by fighter jets over state capitals, aerial flower showers and performances by military bands.