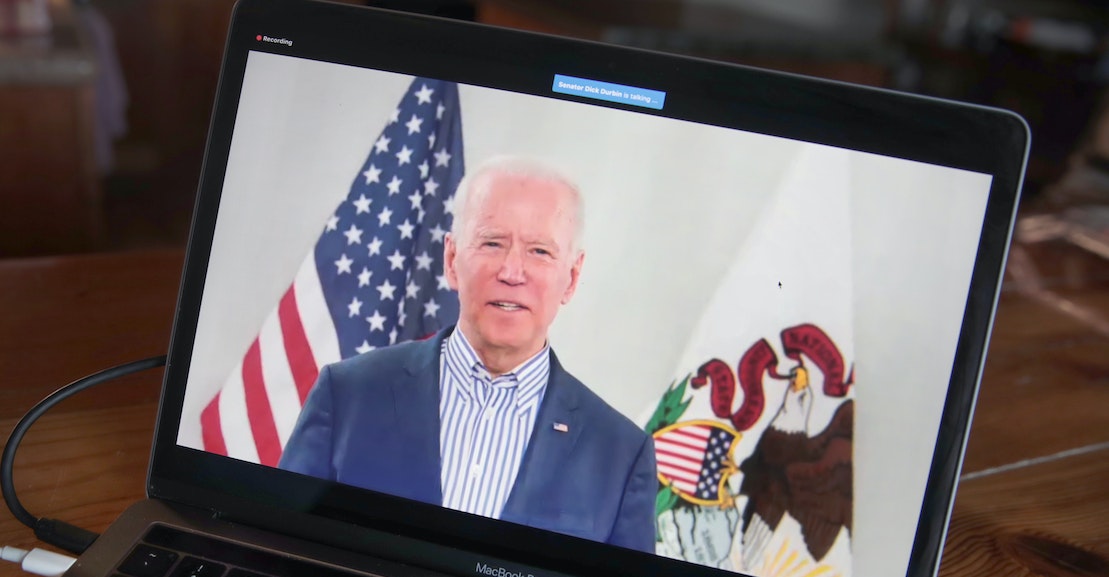 At his debate with Bernie Sanders earlier this month, which was roughly an eternity and a half ago in news time, Joe Biden repeatedly stressed the need for leadership on the coronavirus crisis while criticizing the breadth of Sanders’s proposals. “People are looking for results, not a revolution,” he said. “They want to deal with the results they need right now.” Then, after a string of victories last Tuesday and a virtual victory speech, Biden promptly disappeared from the scene even as the crisis continued to deepen, prompting taunts and speculation from the left about his health and raising questions even among his supporters.

At a virtual fundraiser Sunday, a donor asked Biden why he hadn’t gotten himself in front of more cameras as Trump’s coronavirus briefings took center stage last week. “What I’m concerned about is that we see Donald Trump every day with this crisis giving his press report,” she said. “And I would just love to see you more. Like, how do we get more of you and less of him on our airwaves?”

“They put in a new high-speed line into my home,” Biden replied. “They’ve converted a recreation room, basically, into a television studio. And so, beginning tomorrow, I guess tomorrow, I’m making the first presentation at 11:30 a.m. thereabouts, Eastern Standard Time. And I’m going to speak to these issues.”

As promised, Biden made his Monday appearance. But neither the speech he gave nor the internal discussions reportedly taking place within the campaign on the way forward inspire much confidence that Biden is ready to seize this moment.

His presentation, delivered from a lectern in Biden’s home against a backdrop of bookshelves, was a substantive but stiff reiteration of all he has already said about the crisis so far. He continued to criticize conflicting messaging from the White House and Trump’s early efforts to downplay the severity of the crisis, urged Trump again to utilize his authority under the Defense Production Act to boost production of medical supplies, and condemned Senate Republicans’ efforts to include a $500 billion bailout fund controlled by Treasury Secretary Steve Mnuchin in their stimulus package. He also criticized the Trump administration’s continued legal effort against the Affordable Care Act, which just turned 10 years old. While none of this meaningfully shifted attention away from the White House, two standout moments traveled well on social media. At one point during the speech, Biden’s teleprompter evidently malfunctioned, and he gestured for notes. At another, he referred to Massachusetts Governor Charlie Baker as “Charlie Parker.”

Gaffes aside, the Biden campaign seems to be strategically adrift. His backers have been eager to spin his absence as a consequence of technical difficulties imposed by the measures Biden is taking to stay quarantined. An ABC report Sunday, for instance, quoted one source who said that the campaign has been hard at work “dealing with the realities of Biden’s Wilmington home, like the fact that there aren’t particularly high ceilings, which can make lighting a challenge.” They should consider asking the Sanders campaign for pointers: The Vermont senator has live-streamed multiple events and speeches throughout the primary, including a fireside chat from his home earlier this month.

In any case, Biden is pressing forward with a pivot to video and other media. On Saturday, Politico’s Marc Caputo reported that the Biden campaign is considering not only a “virtual rope-line” for one-on-one time between Biden and his supporters after online events but also a podcast and an aggressive video push on social media aimed at giving “followers and viewers a sense of Biden as if he were a character in a reality show.” One of the leads behind this effort will be Rob Flaherty, Biden’s digital director and the former digital director for Beto O’Rourke’s infamously candid campaign—although Biden, Caputo noted not quite reassuringly, “won’t be livestreaming from the dentist office chair or skateboarding in a Whataburger parking lot.”

This, incredibly, is the plan: In the middle of a national crisis without recent precedent, as the president appears before the public with all the trappings of his office on a daily basis, the campaign of the last vice president wants to give us something like an MTV Cribs look at the candidate. If Biden loses in November, he’ll undoubtedly have enough footage to follow Mitt and Hillary with the next great postmortem campaign documentary. But given the moment, Biden should be leaning as aggressively as possible into the stature and experience that have been the primary case for his candidacy in the first place. Monday’s speech, the first of a regular series of statements on the coronavirus crisis according to the campaign, was conceptually a step in the right direction, even if the execution was a bit iffy.

Another move Biden might consider in order to wrest more headline inches away from Trump—to actually earn the earned media offered him by James Clyburn and his other endorsers ahead of Super Tuesday—would simply be making himself more available to the press. Thus far, his campaign has gone to remarkable lengths to avoid this option. “From the start,” Caputo wrote, “the campaign was designed to limit the news media’s interactions with Biden due to his reputation for gaffes and going off-script, which in some ways makes Biden’s social distancing a boon—his campaign can more tightly control his image.” But controlling a candidate’s image so tightly that he becomes scarcely visible is no way to win an election, and the approach raises disconcerting questions about how Biden would engage—or not engage—with the press as president.

It may well dawn on some Democrats that nominating a self-described “gaffe machine” with a habit of favorably stretching the truth for the presidency at a moment when the importance of clear and honest communication from the White House has been brought into stark relief may not have been as safe and responsible a choice as they imagined. But it is too late now. The general election has essentially begun, and Biden is entering it at a disadvantage not just in public attention. Against Trump’s incumbency and already impressive war chest, Biden has a fundraising apparatus that, in February, was lagging three candidates who have since dropped out and will be hobbled further by the cessation of in-person fundraising events. His staffing numbers also lagged the rest of the Democratic field.

Yet, after two failed primary bids and dismal performances in the first three races this time around, Joe Biden has finally come out ahead, thanks to a critical assist from influential figures within the Democratic Party. The nomination, the prize he first sought over 30 years ago, is all but his. It is not yet clear he knows what to do with it.