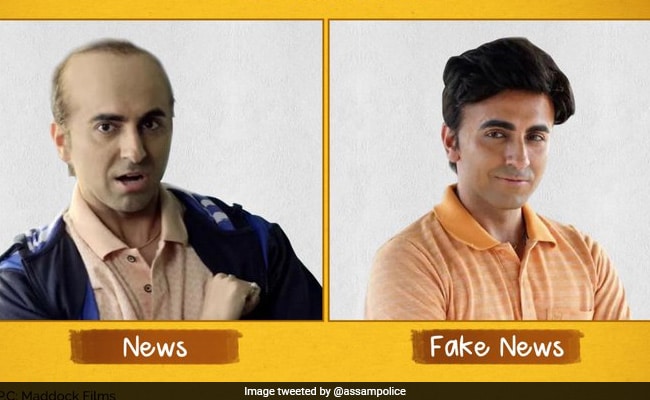 Assam Police explained the difference between real and fake news with some help from Bollywood.

Assam Police amused many on Twitter with their post on fake news. This afternoon, Assam Police took to the microblogging platform to explain the difference between real and fake news, using a Bollywood meme to illustrate their point. The department used two still from Ayushmann Khurrana’s 2019 film Bala to caution against fake news.

In Bala, Ayushmann Khurrana plays a balding man who tries a number of tips, tricks and remedies to cure his premature hair loss. In their Twitter meme, Assam Police captioned a picture of a balding Ayushmann Khurrana as “news”, and one of him sporting a wig as “fake news”.

Sharing the two stills, the police department added a punny caption too. “Hair lies the difference! Don’t be fooled,” they wrote. They also tagged Filmfare Awards and Ayushmann Khurrana in their tweet. Filmfare Awards are being held in Assam this year.

Take a look at Assam Police’s hilarious post below:

Since being shared online this afternoon, the tweet has collected over 400 ‘likes’ and a ton of amused comments.

“One of the best tweets of the day,” praised one Twitter user, while another said: “Nice meme”.

This isn’t the first time that Assam Police has borrowed from Bollywood to share an important message. On Wednesday, they had shared a post on online safety with a ‘Dhamaal‘ reference that left many chuckling.