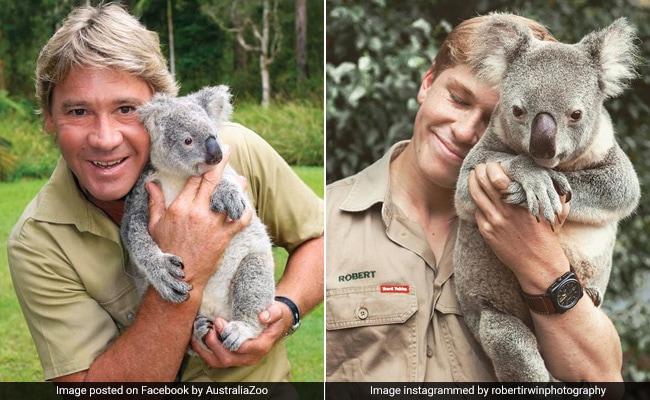 Steve Irwin’s son recreated one of his photographs.

Steve Irwin’s son, Robert Irwin, has recreated one of his iconic photographs. On Tuesday, the 16-year-old took to Instagram to share the photo that has left social media users marveling at his resemblance to his dad. The pic shows him cuddling with a koala at the Australia Zoo, which was founded by Steve Irwin’s parents in 1970.

Robert Irwin was just two-years-old when his father, a beloved Australian wildlife conservationist and television personality, died in a stingray accident.

The image posted by Robert Irwin shows him cuddling the koala, wearing a zoo uniform similar to the one his father wore back in 2000.

On Instagram, the pic collected over 2 lakh ‘likes’ as many commented on the striking resemblance between father and son.

“I legit thought this was Steve,” wrote one person in the comments section. “You look so much like your dad in this picture,” said another, while a third added: “I thought this was a photo of your father at first glance!”

Australia Zoo had shared Steve Irwin’s original image in January, talking about the devastating effect of Australia’s bushfire crisis on the country’s wildlife.

This is not the first time Instagram has been amazed at Robert Irwin’s recreation of his father’s pics. Last year, the teenager had shared moving photos of him and his father feeding the same crocodile, 15 years apart.